Soulland joined forces with gallery-like Head Shop Mister Green from Los Angeles for their latest drop of statement shirts and hoodies. Instagram denied them to boost the campaign via Adds, proving that "Fuck The War on Drugs" is still a pretty provocative claim.

The walking ass showing its middle finger to the world is not meant to be a promotion of drugs but an opinion on a useless war, says Silas Adler of Soulland. History of the US-induced global War on Drugs dates back to the 70s when president Nixon proclaimed drug abuse public enemy number one. The 'official' declaration of war followed ten years later by Ronald Reagan. Many countries got involved in the fight against the production, distribution and use of drugs, like Colombia, Mexico or recently the Philippines, with rigorous police and military force.

By 2012, it cost the US est. 1 trillion $ and took hundreds of thousands lives. Opinions on its success in America are mixed, keeping in mind that it led to mass incarceration, a strained justice system and cases of power abuse by the police.

The latter often refers to the claim that the drug war is racially biased and a tool to fight unpleasant counter cultures. One of Nixon's counsels, John Ehrlichman, later said in an interview with Harper's magazine: "The Nixon campaign in 1968, and the Nixon White House after that, had two enemies: the antiwar left and black people. You understand what I'm saying? We knew we couldn't make it illegal to be either against the war or black, but by getting the public to associate the hippies with marijuana and blacks with heroin, and then criminalizing both heavily, we could disrupt those communities. We could arrest their leaders, raid their homes, break up their meetings, and vilify them night after night on the evening news. Did we know we were lying about the drugs? Of course we did." Until eight years ago, crack cocaine was sentenced hundred times harder than powder cocaine, crack cocaine being more likely used by people of color.

After all, a final judgement is surely hard to make. While some experts say the war's goal is met by making drugs less accessible, numbers of drug use fluctuated over time. But the good news are that many countries decriminalised or legalised marijuana to some extent - although the DEA still schedules marijuana as a drug without medical value and high potential for abuse. This is especially spicy as Codeine, Fentanyl or Xanax are ranked lower, even with painkiller and prescription drug abuse now being a major problem in the US.

Soulland and Mister Green celebrate the baby steps that have been made in legalising weed. Their designs are humorous and lighthearted, flirting with the right to buzz and chill while the campaign's model looks a little baked too ;-) Still, change needs to continue, thus the message is bold and clear and made to be brought out to the world.

To prepare yourself for discussions around the holiday table, check out some more infos on the drug war here or watch the TEDtalk.

Shop the designs at Afura below. 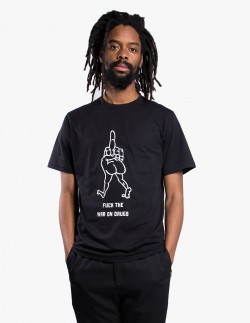